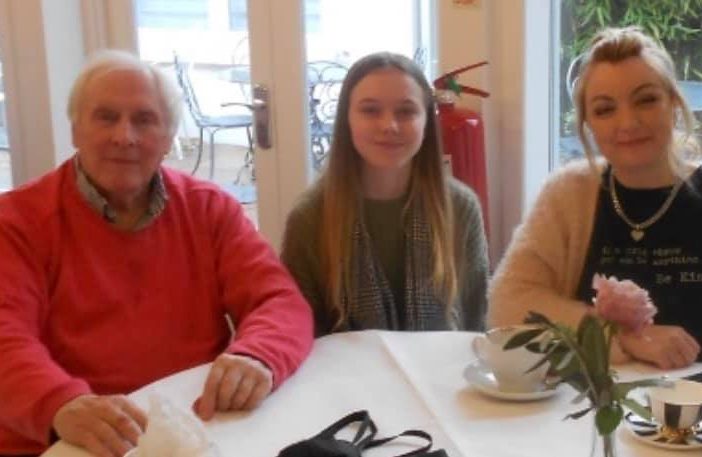 This is John. John was 90 years young last week and we met nearly a year ago when the world was plunged into the craziness of a pandemic.

As I was on a Zoom meeting, sitting at my desk in the window, I noticed John, taking a tumble into the road directly outside my house. Abandoning my call I went out to find he had taken a nasty bang to the head on the pavement. Unfortunately because of the pandemic and the shortage of medical support, I was told that they were unable to send an ambulance so to just take him home.

By this time we had got chatting and I realised he didn’t have any friends or family, apart from a sister who lived several miles away. I managed to get home with some help (thankfully it was just around the corner), and suggested that I would get his shopping and pop around to check on him in a couple of hours as I didn’t like to think of him being left with a head injury, in a first floor flat, unable to walk. I felt so utterly helpless and perplexed by the situation. All I could think was if this was a member of my family, I would want to know that someone would help.

I felt the system had let him down and he was slipping through the net.In the weeks that followed, John bought himself a mobility scooter, which he calls his ‘Aston Martin’ and it allowed him to regain his independence.

So that’s where our newfound friendship started. Throughout the months that followed, we had doorstep chats, walks around the block, takeaway teas, and a doorstep Christmas dinner delivery. After the easing of the original lockdown, John invited me to lunch with my husband and daughter, checking beforehand that my husband wouldn’t be challenging him to a duel for taking my time!

The thing is it wasn’t just about being there at the right time, John tells people how glad he is that he fell at my door, the fact is John helped me more than he will ever know. Covid gave us all time to stop and think.

We realised what’s really important. Amongst the craziness of the pandemic I felt such pleasure in listening to John talking about his life and being there to support him. I hated the fact of thinking nobody else cared and he would be on his own, lonely and struggling.

If I’m honest, when my grandad Bob, the Patriarach of our family passed away seven years to the day, it left a huge hole in my life. John now feels like my adopted grandad. We keep in touch and take it in turns to but the cakes and coffees and have regular phone calls.

Friendships can come in all sorts of forms and social isolation and loneliness can be prevented by just taking the time to talk to one another. We all need to look out for each other. #loneliness #socialisolation #bekind